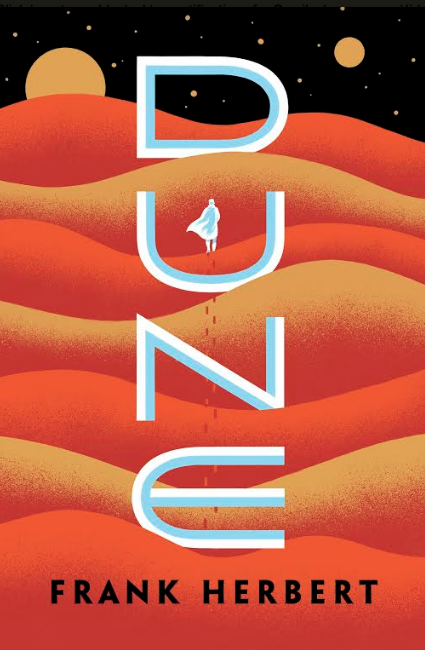 Let’s make this super clear right up front. I think Dune is one of the pre-eminent masterpieces of science fiction / fantasy and one of the greatest novels of the 20th century. I’ve never read anything that seemed so original, such an unusual composition of disparate inspirations combined in an amazing new way. It’s an absolute treat to read. If you haven’t read it, forget the rest of this review and go and read it now. There, I’ve said it.

If you do want to delve into things a little deeper, here’s how I see it. The start of the novel throws you into the action and it takes a little time to catch up with the weird titles and terminology. There’s no explanation, you just have to work it all out. I understand that a lot of people give up at this point. Personally I quickly became drawn into the conflict, which is created by the author dipping in and out of different character perspectives. You get a sense of the diverse motivations that tie characters together and pull them apart, the undercurrents of loyalties and rifts. This creates part of the tension, with the other the imminent move of the Atreides to planet Arrakis, formerly held by their Harkonnen arch-enemies. One of the real strengths of Dune is the political sophistication of the story. Far from being a simple struggle between these two feudal rivals, the story encompasses them, the galactic empire itself, the machinations of the Bene Gesserit order, the Spacing Guild. There are so many potential pulls on a character, it’s fascinating and sophisticated writing.

However, the story really takes off once the Atreides land on the eponymous planet. There is a deal of dramatic irony that starts to build where the readers know more than any of the characters, and you are waiting for the threat to become real. Once it does the story launches into the desert. Is there any setting in any novel ever so brilliantly realised as the deserts of planet Dune? I’m not sure. There is hard science in the ecology of the desert and it seems utterly real, building from the sands and spice up to the behaviours people and creatures have to adopt to survive to the culture that has emerged. And literally underlying it all, the sandworms, some of the most awe-inspiring monsters in fiction. This setting then acts as a crucible forcing the characters to transform, to become who they need to be to survive. Which introduces another theme into the story, that of the messiah with a grand and terrible purpose, which creates even more interest. The conflict between individual need and messianic destiny, the responsibility of a leader to his people are brought to the fore. There are hints of a dread future sown throughout the story with the excerpts from the history of Princess Irulan, and you read with a mounting sense of anticipation to see how this story will play out.

About halfway through my first reading of Dune I was beginning to feel it might be the best novel I’d ever read. The story had developed in an incredible way, the hero was learning the skills and gathering the allies he needed to return triumphantly, and deep mysteries were starting to be unveiled. Yet as the story moves towards its conclusion it somehow fails to live up to the promise of the earlier parts of the book. There is a great battle, the hero becomes who he needs to be, but none of it is quite as satisfying as one expected. After all the world and plot-building, the ending feels a little scant on detail and a bit rushed. It ends a bit before you expect it, leaving you wanting more. It’s the strangest thing about Dune, despite being utterly brilliant, it is also vaguely disappointing and anti-climactic. I have read that this was a deliberate choice by the author, who wanted to leave threads open and unresolved so readers will want to read the book again. Well, that works, but it’s also a bit frustrating. It lacks that psychological closure you get from great climactic battles in, for example, The Lord of the Rings or The Wheel of Time.

I wish that the other novels in the series were as immersive and satisfying as the original Dune. I’m afraid to say I don’t find this so at all. The story takes weird and unsatisfying turns, at least to my taste. So my recommendation is for Dune itself as a standalone rather than the series. But it’s a gold-plated, dead certain recommendation. If you like reading novels, you should read this book – it’s an all-time great.