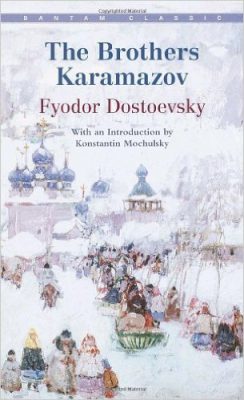 I confess, I actually had low expectations of this book. I read Crime and Punishment a few years ago and found it a tedious exercise. The action was mostly internalised, with characters agonisingly overwrought yet able to piece their thoughts together quite coherently. Some people like this sort of thing – not me.
Brothers Karamazov was far superior to my mind, having a more interesting and realistic story set up, and more attractive characters. Alyosha (poignantly named after Dostoyevsky’s deceased son) is set up as the ideal, with a blend of naivete, spiritualism and faith, and youthful vigour. He is proof that good can come even from the most dissolute evil – his father Fyodor Karamazov.

For me there is an evident strain of Christian moralising going through this novel – in a sense the book focuses on the debate, modern at the time, between religion and the new thinking of the Enlightenment. The idea that there is no moral compass if God is stripped away is at the centre of much of the book’s action – if God can be done away with by his children, why then can a son not kill his father? But can the son live with himself afterwards? A key scene, though to me one of the most tedious and ill-conceived in the novel, is Ivan’s vision of the devil, who sits in debate with the ill atheist.  Dostoyevsky endeavours to make the point that religion is fundamental to the thought of even the non-believer, as if this is proof of its veracity, an engram on the mind of every person. I didn’t find it convincing or interesting.

This was the way of it for me with this novel – at times I was caught up in a character or scene, at times it almost bored me. It felt cobbled together, an amalgam of many stories and thoughts. Perhaps to this extent it is very true to life, where one chooses the narrative thread one wishes to follow. I found the story of the children and Ilusha, very engaging and tragic, mainly driven by the coincidental character of Kolya Krasotkin. I couldn’t really work out what the point of Krasotkin was, but I liked him very much as a character. Perhaps he is Russia’s bleak hope for the future – brilliant, proud, cynical, but very good at heart?

However, all in I can’t say I was gripped by the novel until the portrayal of the trial, right at the end. This was masterfully done. To me, it summarised and presented all the action and themes of the the novel very neatly.

Books that are deemed as great classics that I have I disliked (Wuthering Heights, Crime and Punishment, Great Expectations…) have all contained a common theme – that is characters who feel so wildly and extravagantly that I cannot recognise their behaviour as consistent with what I have observed in real life. I just have never seen or heard of anyone in my acquaintance or wider of people falling into paroxysms of emotion and hysteria due to being upset, or doing things utterly out of character because they’re so wound up emotionally. I’m sure it does happen, and I’ve lived a happily sheltered life – but what I can’t reconcile is when Karamazov brothers have episodes where they are overwrought, yet are somehow (at least in their heads) able to articulate why they feel this way and the basis of this emotion. Perhaps this sort of thing did happen more in the past, before televised football and Prozac. Freud rated the story for its psychological insight but personally I’ve nothing in my experience that makes this book seem a convincing portrayal of humans under pressure. I feel it’s religion thinly veiled as philosophy or psychology. I prefer books when the way the characters act and how they behave is set as the example, and you sort of come to realise it slowly after you’ve finished the book, rather than all the thinking spelled out and the proper justifications given for you.

I quite liked The Brothers Karamazov, but I wouldn’t read it again. Of the ‘great’ Russian novels give me War and Peace every time.