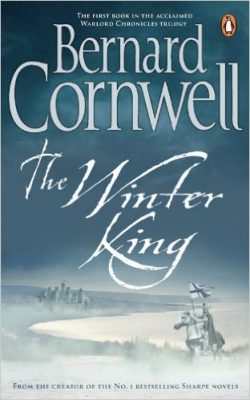 The Warrior series, The Song of Ice and Fire, the Aubrey-Maturin series, The Lord of the Rings

In The Warlord Trilogy, one of the great popular novelists of our time found his great theme. While I’ve enjoyed most of Cornwell’s oeuvre, from Sharpe to Uhtred, it’s these three novels of King Arthur that really stand out for me, that transcend Cornwell’s normal strong writing into the sublime. They’re just perfect.

One of the best things about the books is the narrator, Derfel Cadarn, who tells the story of his glory days from his stony cell in a monastery. It’s really Derfel’s life-story – but he grows to have a close friendship with the great man, Arthur ap Uther. Derfel is a wonderfully sympathetic character for someone who is a brutal killer. You’re swept away with his description of his childhood in Avalon (which Cornwell places at Glastonbury Tor), with his life as he grows from a youth who idolises Arthur to a mighty warrior lord and one of Arthur’s closest friends.

It’s all set in Dark Ages Britain, accurately historical to the extent to which we know of it, with the fading splendour of the Romans against a recognisable British landscape. On a walk in Dorset near Maiden Castle I looked out to see the shingle spit of Chesil beach and realised I was walking a path described in these books, with Portland the Isle of the Dead wreathed in mists even in summer. The description stuck in my mind – testament to Cornwell’s writing. While he excels in action scenes and writes great battles better than anyone, in these books he also creates a beautiful sense of something passing – an old Britain under threat from the Saxons and from a new religion. Derfel’s voice echoes with the loss of the things he has known, and this is a fitting feeling to read a novel of King Arthur, our greatest once and future king.

The setting in the Dark Ages provides an interesting way to explore two of the great themes of Arthurian romance – magic and Christianity. Derfel is a pagan, a disciple of the druid Merlin, and extremely hostile to Christianity, the new order sweeping the bleak and impoverished British Isles. He paints a picture of the early British Christians as arch politicos who wield the pen mightier than the sword, rewriting history to glorify their work and belittle Arthur – or attribute his acts to their influence.

Certainly Arthur is no chivalrous and Christian king on a quest for the cup of Christ in these books – here Derfel seeks a Cauldron, one of the twelve Treasures of Britain which Merlin needs to restore the old gods. Magic is Merlin’s shadowy realm, a druid magic of blood and filth and fire. Derfel’s line into this is through his childhood confidant, Nimue, Merlin’s successor. The relationship between her and Derfel, who is bound to her by blood oath, is another centrepiece of the novels. She is a magnificent character, well-realised, growing from a fey alluring wisp of a girl to a horrifying witch as the novels reach their conclusion.

All the usual cast of Arthurian characters are shown in new light here – with Lancelot as a slimy liar who pays poets to write of his great deeds, Arthur as a warlord torn between honour and ambition, Merlin as a mercurial druid.  The story of Arthur’s kingdom is always in the background, but what drives the narrative is the relationships between the characters. One main story is Arthur’s romance with Guinevere, another is Derfel’s love life. From these personal entanglements the great events of the age play out, sometimes as a consequence, sometimes in spite of everything the characters do.

These books, though set in so distant a past as to be almost fantasy, nonetheless have that ring of truth so necessary to great fiction – these people and their lives are real, and I love them.