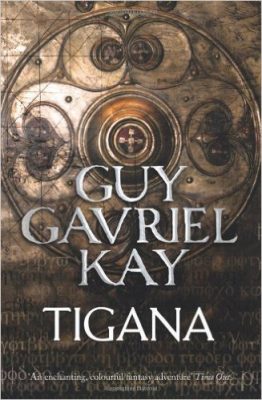 The Lord of the Rings, Unfinished Tales, The Warlord Trilogy, The Deverry series

I read somewhere that every great novel has but one true theme – that is of the human soul in conflict with itself. I think Guy Gavriel Kay’s novels nail this – they manage to be about very much more than a story – yet they also tell great, sweeping tales at the same time. He is, in my opinion, technically one of the best fantasy writers, and one of the most adept at moving my emotions. There a strong streak of sentimentality in his works – they are very romantic – which is perhaps against the trend for a more gritty tone in modern fantasy books. I feel his novels are very successful at presenting the bitter-sweetness of human experience, presenting the horror and wonder of life against a background of great stories and real-feeling people. His stories and worlds aren’t as multifarious as many others on this list, but his characters are well-defined, and his stories rise and fall with the cadence of poems. They are stories of ideas, of love and friendship in difficult circumstances, of conflicting duties and conflicted self. The relationships between his characters have the real ring of truth to them; blurred, binding, wounding, healing. Kay writes wonderfully complex dialogue, full of subtlety and shades of meaning, pregnant with what remains unsaid.

The Fionavar Tapestry is a beautifully told, classic fantasy epic – good versus evil in the first of all worlds. There are familiar fantasy tropes, more or less loosely hung on Norse/Celtic mythology, svart alfar mingling with Arthurian legend. These books owe a lot to Tolkien, but do him justice – there’s truth and beauty and terror and tragedy and heroism and sacrifice and wonder in each one. Some of the imagery is incredible – a dragon made of crystal, a beautiful, demoniacal swan.

Tigana is a roaring tour-de-force of a novel. Of all fantasy novels, it’s the one I’m most likely to recommend to people who don’t usually read the genre. The idea behind it is very current and very clever – it’s a story about identity and culture and language and what things are worth fighting for. It’s as haunting as a strain of song.

The Lions of Al Rassan shares many of the strengths of Tigana. The setting is in a fantasy version of Spain, with newly politicised versions of monotheistic religions clashing, and works well. There is a sense of a time that is passing away, a more cultured, civilized age, with echoes reminiscent of the literature of the Al Hambra palace in Granada. This is a tale of rival kingdoms, of a clash of religions, with war building inexorably, casting a shadow over what has been a brief golden age of peace. The prose is taut and the story tense – but it is the characters that make this novel great. The tale of amicable enmity, or adverse friendship between the great men of their time, Roderigo Belmonte and Ammar Ibn Khairan, stays with you forever.