The Wheel of Time 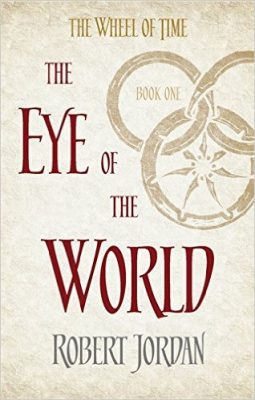 The Lord of the Rings, Dune, The Fionavar Tapestry, The Song of Ice and Fire, The Deverry series, The Riftwar series, His Dark Materials

An absorbing tapestry of characters and stories, richly woven together to great effect. The central thread is the foreshadowed battle of Rand Al’Thor – a farm boy set to become the most powerful sorcerer in the world – with the Dark One, the epitome of evil who seeks to unmake all existence. It is classic fantasy, with good and evil definite forces in the world but not easily discernible in the human characters. One of the great things in the Wheel of Time is the kind of MacCarthyist feeling of threat – any character could turn out to be a ‘Darkfriend’, an adherent of the Dark One who plans to assassinate or otherwise betray the leads.

The mechanics of the universe which Robert Jordan has created seem to me to be based on pretty deep astrophysical speculation about the nature of the real universe, the sort of thing you might see as an explanation written by Carl Sagan or Stephen Hawking. A wheel which spins out maybe infinite universes where every possible variation of chance is played out – interesting. And woven between them Tel’Aran’Rhiod – the world of dreams – a kind of Jungian prime reality where myths and legends reside until they are spun out again into actuality. In every world there exists the duality between the Dark One and the Creator, the battle between the Dragon and the Dark One, and there are and have been infinite variations of it. For me the way the mechanics of the universe Jordan has created drive the story and are realised in every detail of it, is the most amazing thing about these books. This is particularly evident in his descriptions of magic – channelling – and how men and women use it differently. I love the massive use of sorcery in these books but even more I love how wonderfully Jordan has envisaged this in every intricate detail.

I like how the ancient past informs the present in these books, with relics of a more sophisticated age scattered around the landscape in mysterious ruins. I also love how powerful the enemies are – they remember the Age of Legends and have access to all its knowledge, while the protagonists struggle on in ignorance. The Dark One can even conquer death, so even killing your enemies doesn’t stop them coming back under a new guise. Often the effect is ironic, with the reader knowing much more of the plots of the antagonists than the main characters who harbour them in their camps.

However, though I feel this series reaches the highest heights of fantasy fiction, it is also gravely flawed. One major issue is pacing. The first two books, The Eye of the World and The Great Hunt both start slowly and end dramatically. There is quite a lot of atmosphere and character-building going on – introducing the main actors and some of the key locations. But then the series catapults into relentlessly fast-paced and absorbing action. These books are seriously hard to put down, even on a repeat read and are right up there for me with the most enjoyable books I have ever read. Yet after the sixth book the series starts to meander in places, plotlines develop that you find yourself wishing would end. Does there have to be quite so much time spent in Salidar, or with the travelling show, or stuck in Ebou Dar? The frustration of the character spills over into the reader. The Crossroads of Twilight is a poor contribution to the series – nothing happens to move the main storylines forward until right at the end!

One has also to tackle some feeling that the work is derivative in elements. The Myrddraal owe more than a little to Tolkien’s Nazgul, and the Aiel are rather reminiscent of the Fremen on Dune. Yet all works are inspired by others, and I cannot think of two better role-models for a fantasy author. For me the many wonderfully original elements of The Wheel of Time outweigh any sense of the contrary.

Another problem I have with the series is how much time is spent dwelling on the politics of a never-ending procession of harridan Aes Sedai. I completely lose track of these characters and lose interest in them and what they’re wearing that day. They’re just not likeable enough to care that much about. Jordan creates some great and strong women characters – Aviendha, Faile, Moiraine, Cadsuane – but otherwise has a tendency towards making women appear shrewish. Mainly, the relations between men and women are built on the idea of the ‘battle between the sexes’, and emphasises gender difference. Women and men each think they understand each other, and that they know best. Sometimes it’s amusing, but it is often tiresome. To a reader who has grown up in the late twentieth and early twenty-first century, some of this just doesn’t feel real.

On the theme of unpleasant women, I struggle with the development of Egwene as a character. She has a headstrong appeal in the early books but as she becomes more powerful she seems to turn into an increasingly manipulative bully. While Rand, Mat and Perrin’s ta’veren nature give them reasons to become great, Egwene seems to do similarly well based on a few months training with the Aiel Wise Ones and some coaching from Siuan Sanche. It doesn’t quite ring true to me and I find it hard to like her as a character; which is a shame as a lot of time is spent on her storylines!

How can I justify giving the series such a high rating when it has such flaws? I suppose I’d rather an author reached towards something incredible and nearly achieved it, than play it safe and perfectly execute a mediocre story of limited scope. Jordan’s work is mind-expanding, perfectly realised and at times more enjoyable and absorbing than anything else I’ve read; for these great things I can forgive its failings.

Brian Sanderson assumed the heavy mantle of finishing the Wheel of Time series on Robert Jordan’s death – in my opinion he has done a fine job of tying the threads of story back together and bringing them to a thrilling climax. It doesn’t always wed seamlessly. Sanderson’s writing is sometimes too simple for my taste, the dialogue in particular lacks the subtlety and panache that Jordan commands. Occasionally the characters almost seem charicatures of themselves – Mat Cauthon in particular. This might be inevitable when you take over writing about characters that you did not create yourself. But all in all he does the series justice, which is saying something. I personally prefer the way he depicts women – I find them more attractive characters in Sanderson’s words than in Jordan’s. Nynaeve he rescues from being rather horrible in the other books!

For me, the final book, the beautifully titled A Memory of Light, was a worthy climax – Brandon Sanderson should be immensely proud of what he achieved. The story wove back together perfectly in an epic conflagration. I’ve never read a book that felt more like reading the end of the world. It was gut-wrenching, tear-jerking, awe-inspiring – a proper finale for an amazing series of books.