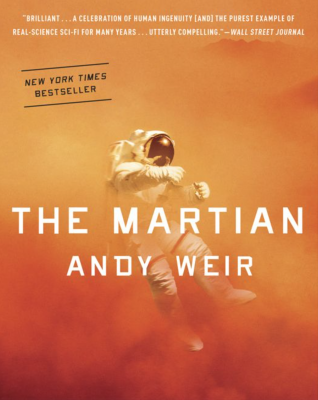 Anything by Michael Crichton, The Gone Away World

The Martian isn’t the sort of book I’d normally pick up, but it was recommended to me and I gave it a try. I’m glad I did. The opening line grabs your attention immediately, with profanity right from the outset followed by a pretty tight precis of the situation.

Mark Watney is making an entry into his Mars diary. He’s been abandoned by his crewmates who have launched into their return journey to earth, thinking him dead in the wake of an accident in a Martian storm. He’s got to work out how to survive.

There are two things that make this novel. One is the character of Mark Watney. He’s a tough, irrepressibly humourous geek who just keeps going in the face of an impossible task of survival. I found it impossible not to like his foul-mouthed irreverence, and was rooting for him throughout the story.

The other element is just how much knowledge Andy Weir has on the detail of space missions, and how well he’s thought out how things might actually work on a mission to Mars. In the edition I have he explained he built plot lines by thought-experiment – for example, how would you go about growing potatoes on Mars? I’ve given this novel a 5/5 for the setting because it’s totally believable. Maybe someone who has intimate knowledge of space missions could pick holes in it – as someone who was interested as a kid and knows a bit having read a few books on the subject, I found it entirely convincing.

There are aspects of this novel that didn’t quite work for me – the number of twists and accidents almost ground me down. Other thrillers I’ve read do the same. You sort of want the world to let up on Watney a bit. It didn’t ruin the story for me though, not by a long shot – the author’s point is that Mars is an incredibly hostile environment.

The other thing I didn’t quite like was sudden shifts to a third person perspective. This works for the story on Earth, with NASA working round the clock to work out how to retrieve Watney. But where it didn’t work for me was the occasional description of Watney on Mars. These passages were used to try to build dramatic tension/irony, where the reader knows something that Watney doesn’t. I guess with the epistolary form of Watney’s story, as it’s all written after the event. However, I much preferred reading things from Watney’s perspective. And Watney’s anticipations of what might happen next give the novel an enormous amount of tension.

I found it pretty unputdownable and read it in about two days. Recommended.