The Malazan Book of the Fallen 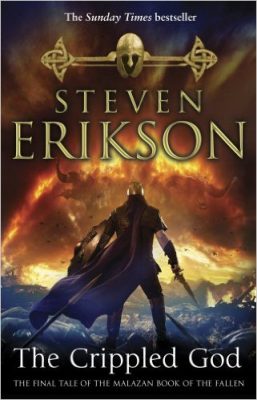 Mind-blowing in their scale, scope and detail, these books tell a story that spans all creation. There are gods, heroes and mortals swept together, out of control.

There’s a feeling of density to these books – the world is densely and intricately layered, the atmosphere is dense with violence and sorcery, the words are thoughts, dense on a page. I love Erikson’s idea of convergence, where power draws power like a lodestone. His Ascendants (mortals who have followed a path of deeds to immortality, or immortal gods and heroes representing a fundamental aspect of existence) compel interest, while his human characters struggle on in their wake – or outfox them.

The complexity and breadth of Erikson’s tale is amazing – initially it seems that there are few characters in common between many of his books, yet slowly they converge over the series. In fact, the series is structured as a clash of civilizations, so some books will introduce entirely new character sets that subsequently meet – usually on a battlefield.

I laugh in joy at some of the action in these books, at the words of characters and, well, how ridiculously tough they are! They drop pithy lines at the height of the carnage like 80s action heros. A great triumph of the Malazan series for me is the character of Anomander Rake – an all-time favourite. There’s more than a little of Elric of Melniboné in him, with his dread sword – but Rake is sort of a development of that type. He’s so memorable and distinctive in appearance, and his powers and deeds across the series are astounding. Moving from age to age, conflict to conflict to prevent the immortal ennui of his race, he blazes across these books like a comet. He’s an incredible achievement and one of which Erikson can justly be proud.

I also really love the millennia-spanning war between the T’Lan Imass and the Jaghut, and the various characters spinning out of this – Onos Toolan, Onrack the Broken, Gothos, Icarium. I wonder if the 1980s animated film ‘Fire & Ice’ was an inspiration – the sorcery of ice being used against caveman-type characters who have the power of fire seems similar. But Erikson takes that sketch and develops it into a masterpiece of pathos.

Erikson paints a bleak picture of the reality of life – nature red in tooth and claw, survival of the most brutal. I feel that a weakness of his novels is the tendency of the narrative voice to espouse this view regardless of the character who is currently being portrayed. I sometimes find it difficult to discern between the thoughts of Trull Sengar and Cutter and Whiskeyjack and Mappo Runt etc etc. Many characters think the same, each point of view is spoken from a similar voice.  It’s especially difficult because of the mutability of characters’ names – characters wear names like clothes, depending on who they want to be. I never like it when characters are just mouthpieces for ideas, and I feel this happens sometimes in the Malazan series – the same view hammered home again and again. By and large everyone dwells on the bleak futility of existence. This certainly gives the stories their ambience.

A couple of narrative voices stand out – Kruppe – who veers between distinctively amusing and distinctly irritating, Tehol Beddict and Bugg (always brilliant), and Karsa Orlong, who starts off a bit of a goon but develops into a great character. Anyone who wanders round seeking the toughest possible opponents to fight for others to ‘witness’ is alright by me. The marines are also well-drawn with some great gallows and absurd humour – they remind me of the violence and banter of some of the Vietnam war-films like Full-Metal Jacket, which always felt true to the experience of war. Occasionally you get stuck with nasty characters and sometimes they get too much play time – like the Patriotists in Lether. But usually Erikson moves things on at a suitable pace to get you through his weighty tomes.

The sweep of the stories is brilliant and the world Erikson has created is fascinating to explore. The story has an archaeological time-span – imagine if dinosaurs had evolved to immortality as did our ancestor apes – this is the world Erikson has built. I’m astounded at the detail of his imagining, though it becomes more comprehensible (if no less impressive) when you read that his world was created in concert with Ian Cameron Esselmont (whose Malazan books I have also enjoyed). Humans contest with forces millions of years older than they, and elemental beings of light and darkness. Each race has its own terrible past, its own agenda.

For me, the narrative drive for the stories comes out of the antagonist figure – the Crippled God – an alien being brought down to this world by ancient sorcery and chained by the Elder Gods and Ascendants in existence at that time. He has made his bid to join the Ascendants of this world, and the powers that be must realign and adjust to his alien and poisonous presence. The story arc is very interesting – good and bad depend very much on your point of view. Sometimes a character you like does terrible things, and characters who have been seen as antagonists seem more likeable later, once you see things from their point of view.

Beware too – none of your favourite characters are safe – they live dangerous lives and reap the consequences. Sometimes (quite often actually), horrible things happen to nice people. It’s a very grown up and sophisticated modern fantasy.

All in all, I’m blown away by the Malazan Book of the Fallen – highly recommended.