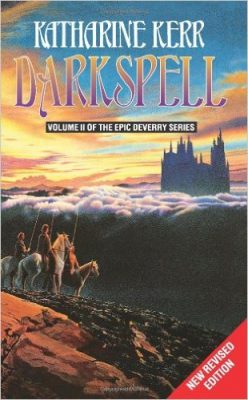 Anything by Guy Gavriel Kay, His Dark Materials, The Wheel of Time

Katherine Kerr’s Deverry series takes shape over lifetimes – souls reborn into a cycle of suffering. I don’t know the inspiration for this device (Buddhism perhaps?) but it works beautifully. The setting is a sort of Celtic mythscape, which, over the course of the books, spreads further afield to lands reminiscent of ancient Greece or the African coastline.

There’s a love-triangle at the centre of the story, but these books are far from soft-hearted – it takes many lifetimes of tragedy before the star-crossed lovers have a chance to get it together. At times the mistakes the characters make become frustrating – they get kidnapped, or forget who they are (or both), or refuse to listen to sense and get themselves killed. It never quite feels like a plot device, but the story doesn’t always flow.

One of the really distinctive points of these books is the dialogue and speaking voice the author has created for her characters – I find it very convincing. Phrases stay in your mind, you can imagine the characters speaking to each other in a lilting Celtic accent. The words used are based on ancient Welsh, and have a ring of authenticity that makes the story and places somehow more real.

The characters are memorable enough – Rhodry Maelwaedd and his lover Jill – but I particularly like the character of Nevyn, the Master of the Dweomer, caught in a web of fate and made near immortal, along with his most apt pupil, the ebullient Salamander.

But for me, the best part is the descriptions of the dweomer, magic. The reader travels with magicians into a weird dweomer-landscape, which glows with unearthly light and is populated by the creatures of the dweomer, the Wildfolk, who help the wizards effect their spells. It’s based on genuine British magical tradition, and echoes true in some eerie psychological sense. You’re swept on strange, vividly imagined journeys through the mystical hinterlands of the dweomer, absorbed into the story like the Wildfolk who fade into the forest, the waters and the wild.