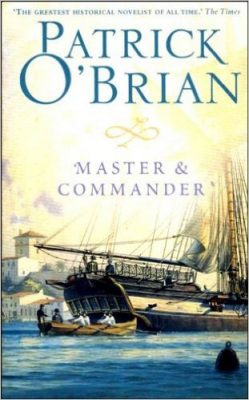 Oh I love these books. I discovered the series in 2013 and have torn through all twenty since. I’ve found it difficult to make myself read anything else, and have taken to reading them almost every year. The first book, Master and Commander, drops you in at the deep end. You wonder a bit why you should care about these characters whose flaws are early apparent, and you have no idea what they’re talking about on the ship.

But O’Brian’s delightful trick is to teach you the ropes (literally) in parallel with Stephen Maturin, who as a landsman is as confused as you are about all the naval terminology. After a while you get the gist of it, and it doesn’t matter any more anyway. You’re swept away with the soul-achingly beautiful descriptions of the ever-changing sea, the perfect dialogue, the touching humanity of these sailors in their fight to survive war and the elements.

O’Brian really trusts his reader to get over the terminology of the ship’s anatomy and engage with his vivid stories of life at sea. He engages you with his characters, extremely well-realised and always internally consistent, fleshed out little by little over each successive scene and book. You start to feel they’re real –  there’s never a false note struck in their language or behaviour. Indeed, one of O’Brian’s great talents is to convey the idiom of different characters. There are little writerly tricks of characterisation here or there, but mostly you feel he just has got into the tone of the times, and knows his characters through and through.

His picture of the times is historically utterly convincing, and some of the stories take on the great social controversies of the time. You get the feeling of a time of upheaval, where Nelson’s navy is slowly giving way to a navy based on a stricter, more class-bound society, probably coalescing in antipathy to the French overthrow of the established order. His vision of life on ship, the characters, the tensions, the day-to-day routine, is entirely believable.

The relationship between Jack Aubrey and Stephen Maturin, and the depiction of each of them, takes these novels to literary quality. Two men who are quite unalike become great friends through the unlikely medium of love of music. Travelling with Aubrey gives Maturin a renewed purpose; Maturin gives Aubrey the unique luxury of a soulmate to unburden himself of some the cares of leadership. In the early novels I thought Maturin might not sustain himself over so vast a series – his role as a doctor and natural philosopher interesting enough but not enough to generate drama of itself. However, within a few books his background as a duellist and his engagement with naval intelligence turn him into a protagonist quite equal to Jack Aubrey in terms of generating adventure. I love the way he speaks, with a convincing Irish twang, his great learning and prodigious memory apparent in his vocabulary.

Jack Aubrey is the Heart of Oak, a navy man through-and-through. He’s such an interesting concoction of courage and clear-sightedness on sea, foolish naïvity on land. I love his sense of proper behaviour, his love of the sea, his awful majesty as captain, the unexpected depths of his character that come through in little delicately drawn vignettes, such as his lonely, magisterial violin-playing overheard in the twilit dawn.

There are slight flaws in the series as a whole. The timescale isn’t consistent – too much happens in too few years. Apparently O’Brian said that if he had known how much content he would want to write in this series he would have started at an earlier date. He explains it away well enough, and as a reader I personally feel this lack of historicity doesn’t detract at all. I wish more happened and there was more to read! The novels where a large portion of the action takes place in England are not as strong for me. Aubrey and Maturin’s domestic cares are essential to their characters, but don’t for me make as compelling reading as their adventures at sea.

The women characters are necessarily less featured in the story, for the main setting of the book historically didn’t admit them much to the action. However, the women characters, the wives, friends and lovers, are wholly well-realised – except, for me, Diana Villiers. While she generates an enormous amount of interest and drives storylines, she is too much the femme fatale for me, too mercurial for anyone to pursue with such dedication without throwing their arms up in frustration.

There isn’t a terribly strong narrative drive to some of the books, it can feel you are just floating along with the ship waiting for the next incident to occur. For people who like a nice neat narrative arc this may not be for you. But I keep turning pages, entranced simply by the sense that I am accessing a wholly real world other than my own, looking into the lives of real people who lived in an interesting time, their thoughts and feelings as comprehensible and mysterious as those of my friends,  the little foibles of characters forgiven because on the whole I love them.

The sea too emerges as a star of the series, a protagonist ceaselessly generating interest, fickle, terrifying, wonderful. O’Brian has captured the nature of the sea itself, and written it onto his pages in perfect prose.

I cannot recommend these novels enough.